WHAT TO DO WITH ALL THOSE SPICES IN MY CABINET. I have been cooking a lot because of Paleo Lifestyle. Requires cooking every meal. The crazy mess of spices in the cabinet was driving me NUTS.

I wish I took a before picture, but it was very hard to find the spice you needed when they were all shoved into one shelf, and looked the same.

I went to Walmart, (checked target but they had nothing) and picked up drawer organizers. For cheap, they came in three packs. At target I got neon dot stickers. I just wish they came with more colors!

Took all the spices out and wrote what they were on the TOP lid. why don’t companies do that already? I then organized them into groups of five. I took the color dots and put them on the bottom of the spice, that way we know where to put them back!

I placed all the groups into their own organizer, which was color coded.

Then made a list on the side of the cup board of what every spice. With the color sticker next to it so you could find it!

Update: My cupboards have been jam packed as long as I Can remember. We have very old tupperware and a million other things in our cupboards that we don’t use anymore. Time to organize.  Heres the before of one of the cabinets I did: 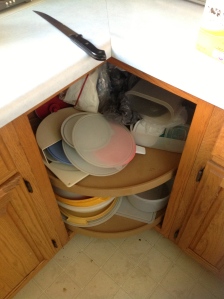 The biggest problem was finding proper lids to the proper tupperware. We have multiples of many things but I decided to only keep what we had enough lids to. So we had about 8 bowls, but only 4 lids, I took out the other four bowls. Same with mason jars. There was tupperware in there I never knew we had. Another problem was my mom was using large tupperware to store smaller tupperware, so there was no point in owning the large tupperware because it was stuffed with smaller, and no one was going to empty it to use it. So this had to change as well. Again, heading to Walmart and using the cheap small organization bins they have can make a world of a difference. I also just got rid of any tupperware that was warped, if its to hard to put on the lid, I am not going to use and neither is anyone else. The after: 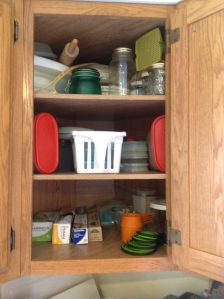 I also emptied out the lazy susan, and two other cup boards, there were so many things in there we didn’t realize that we didn’t need. Such as christmas mugs, candles, servers, presents my parents received from their wedding. Silver bowls, silver servers, Air popper popcorns, old coffee machines, Things that you over look everyday because they are covered with other things. We made a huge pile to donate. Now I have a great understanding of what we actually have in my kitchen and now I can USE that stuff in the future!! It is exciting, because some of the tupperware things will be really handy. Such as the pickle container hahaha.

Quote of the day: You never know what you have…until you clean your house.